“Hi, I’m Lei, and I like to ride bikes” I chirped from my spot among the twenty or so other women. We were gathered for a weekend of all things bicycle. A plan brewed up in a local coffee shop last March manifested into a successful event simply dubbed Women’s Mountain bike Weekend. Amy Dalton, former Executive Director for Alaska Huts said, “there’s a demand for women’s only outdoor experiences.” I spent the weekend at Manitoba Cabin to get the story as Alaska Huts sought to answer those demands.

In this video, the amazing Petra Davis shares her story of being mauled by a bear during an endurance cycling event to a curious prospector who came upon the group of riders while working a gold claim.

The event was made possible with the help of local bicycle badass Christina Grande of Alaska Bike Adventures, and other volunteers and donors in the Alaska cycling scene like Fatback Bikes. Led by folks passionate about using bikes as tools for fun and social change, the result was a weekend full of women empowering women to get after it on mountain bikes. Garnering 16 in attendance, every bunk was full between the two 8-person yurts, bikes leaned hither and thither on trees and buildings, the landscape dotted with tents to house the 7 volunteers.

Outside the main cabin – as we stood in a large lopsided circle – a la first day of ‘class’ introductions, sharing motivations for participating in both the event and cycling in general, common themes emerged. A love for cycling was an obvious unifying thread, as was a desire to learn. From there, things became more abstract yet iterated by many: the powerfulness of being active in a male-dominated field, the benefits and comfort derived from female representation. 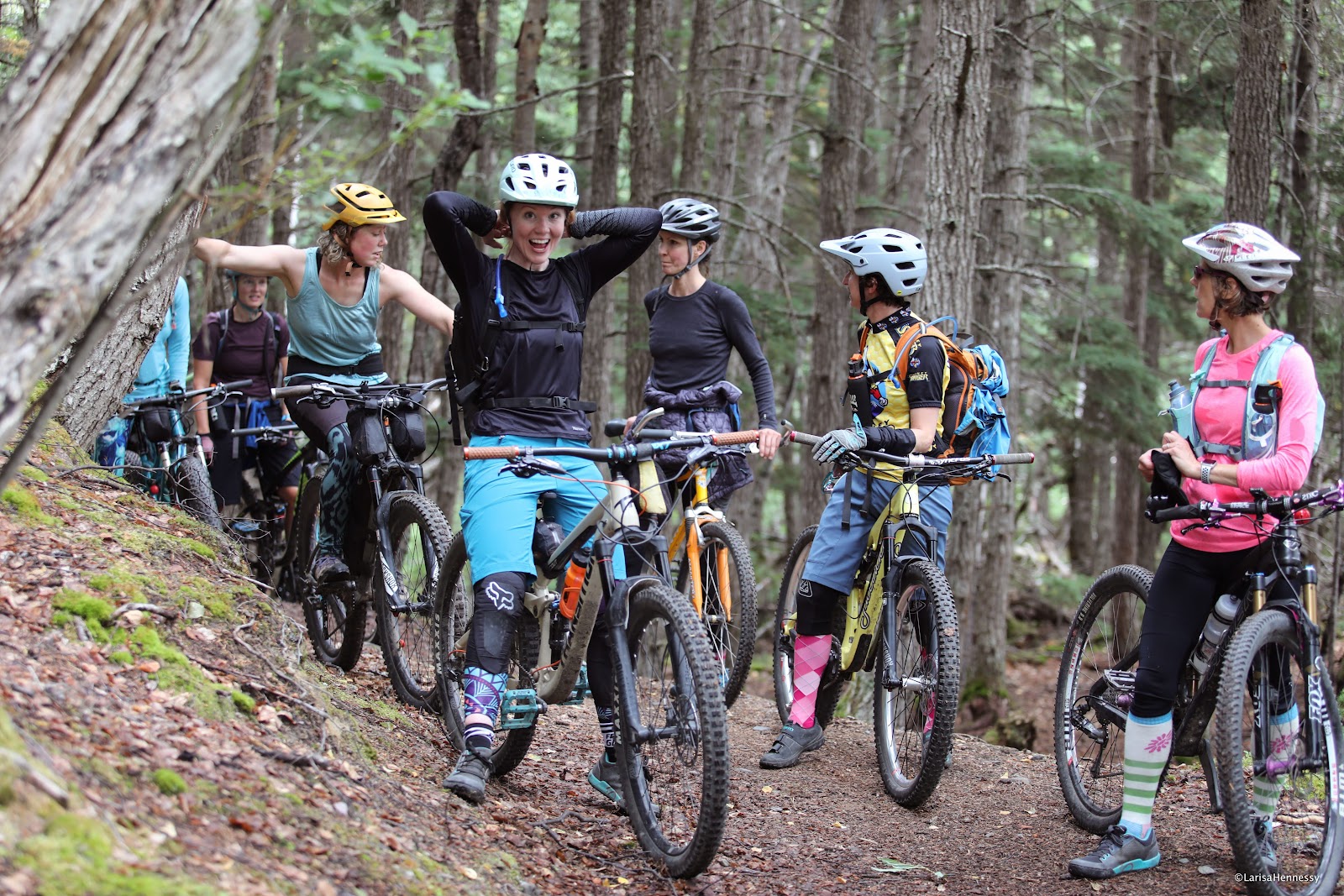 The weekend provided a safe space for women interested in learning bike maintenance, basic mechanics, practicing skills with trained mountain bike instructors, as well as the chance to build or establish relationships with women around the Anchorage community. With three different groups based on riding level, finding a destination and group that jived with personal skills was easy. The beginner group was led by Christina Grande and Rebecca Noblin and rode Crescent Lake. The intermediate group was led by Cait Rodriquez and Danielle Dalton and rode Devil’s Creek Trail, with the advanced group getting a head start also ascending Devil’s to Resurrection Pass Trail thanks to Petra Davis.

As a female rider who primarily hits the trail with men, I didn’t realize how rewarding an experience mountain biking with a large boisterous group of gals would be. There were so many voices uttering words of encouragement, of shared joy, words meant to bolster. I left the trail recognizing my fierceness. 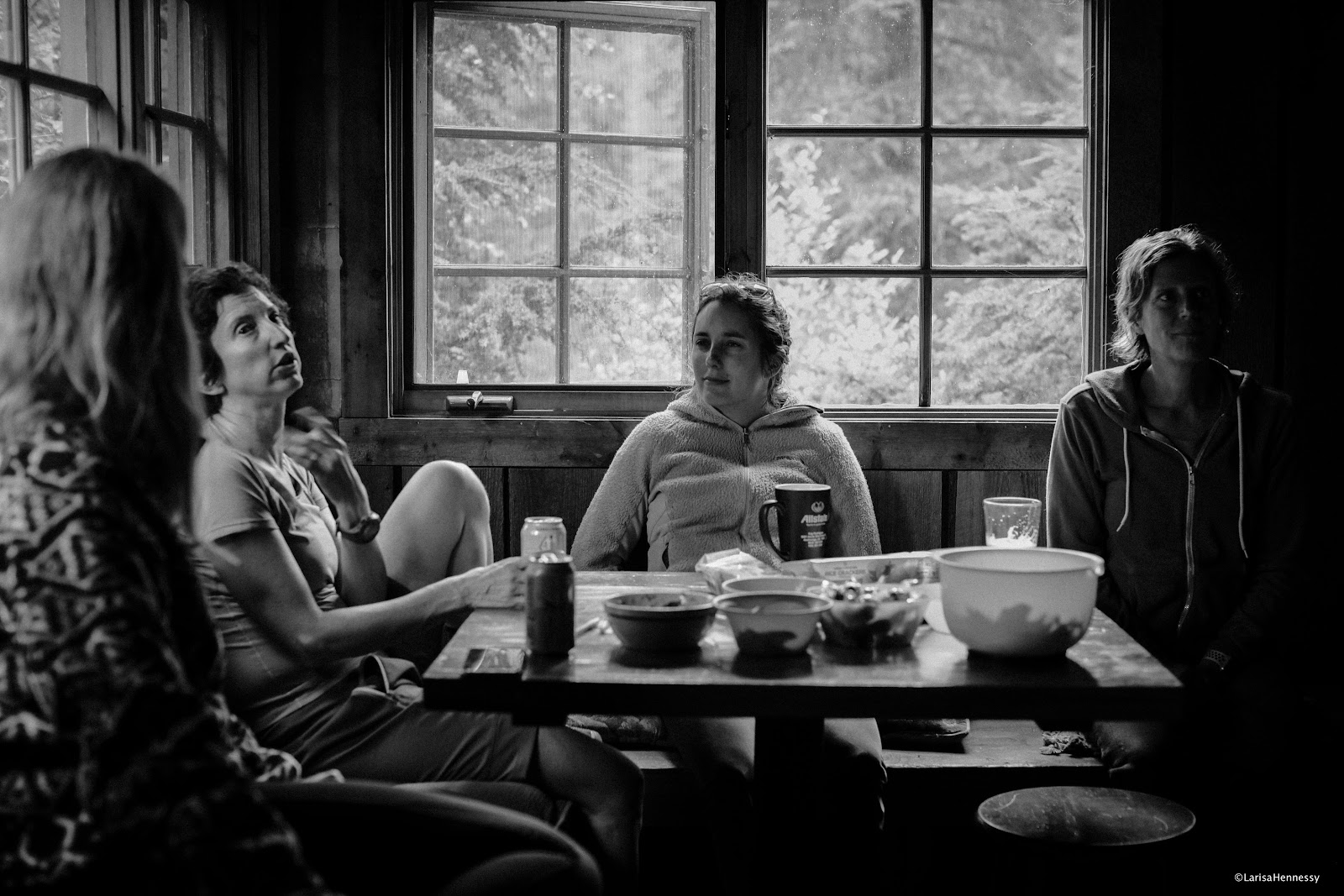 Now, circling back to that term I used earlier, “male-dominated field”- what weight does it really carry? This bit is dry but important because from the statistics I found based on various studies conducted by the US Department of Agriculture Forest Service (think bike trail locations) and the Canada Tourist Commission (think Whistler bike parks), mountain bike participation by males ranked around 70% and females at 30%. This falls in line with demographics gathered by the US Department of Transportation in a National Household Travel Survey, which found that in the US, 76% of all bicycle trips are made by men and 24% are made by women. Skimming through the texts of these studies further, a fuzzy image was conjured of the average mountain bike trail user; it seemed to resemble an older, affluent, white man. Study after study reported similar demographics, in places across the US, Canada, and the UK.

I was especially proud of the part I play in shaking up the status quo of a mountain biker as I stood shoulder to shoulder with a group of strong female cyclists who ranged in age from mid-20s to late 50s, eager to explore some Alaskan backcountry by bike, on a rainy summer day.

After a glorious day of biking filled with fireweed, stream crossings and several bee stings, a pony keg of Cynosure IPA sat chilling in the river awaiting our return, 2 boxes of wine, along with a case of Alaska Cider Works, and ½ gallon of whiskey. Around the campfire that evening, raucous laughter filled the air punctuating the meaningful stories shared. 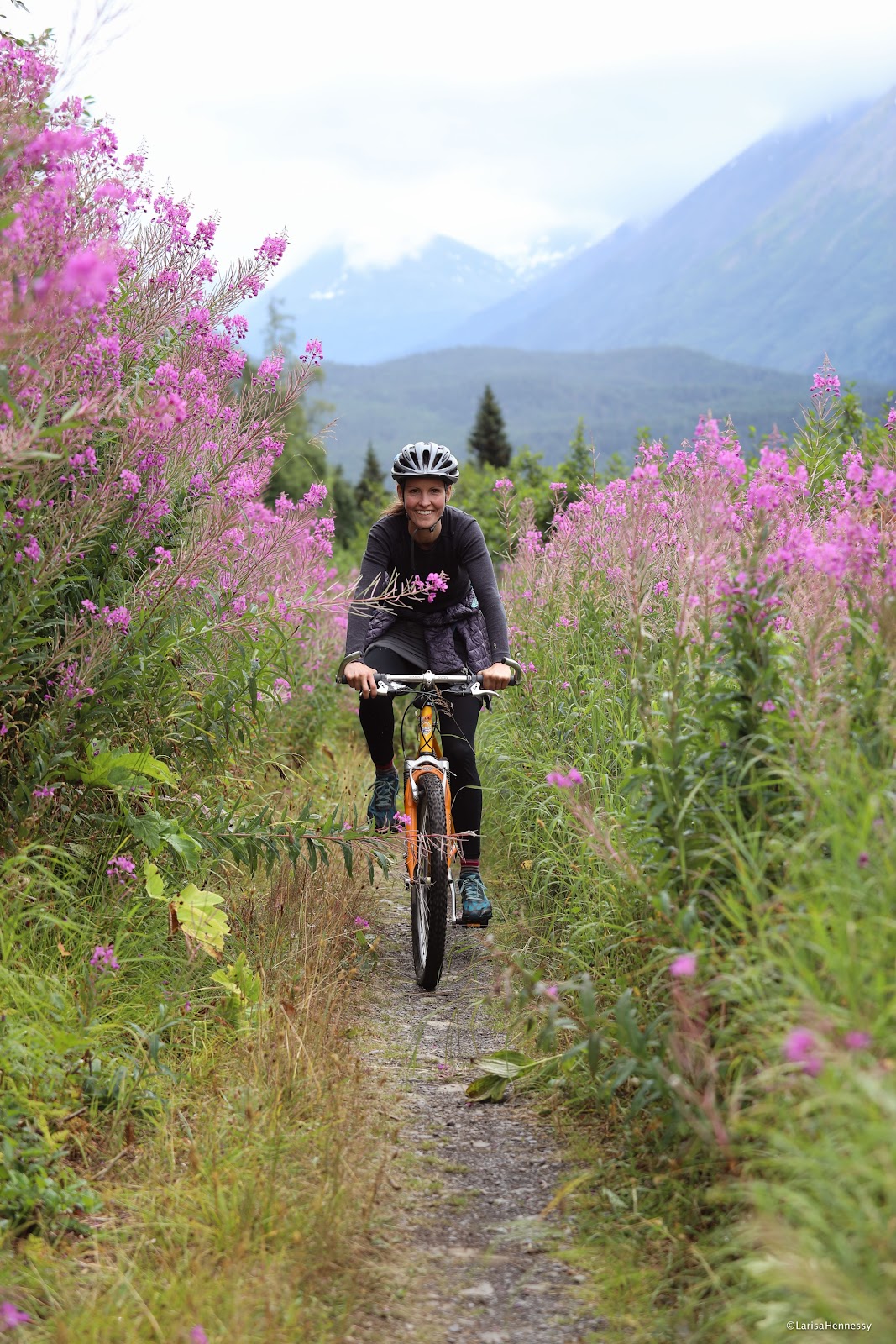 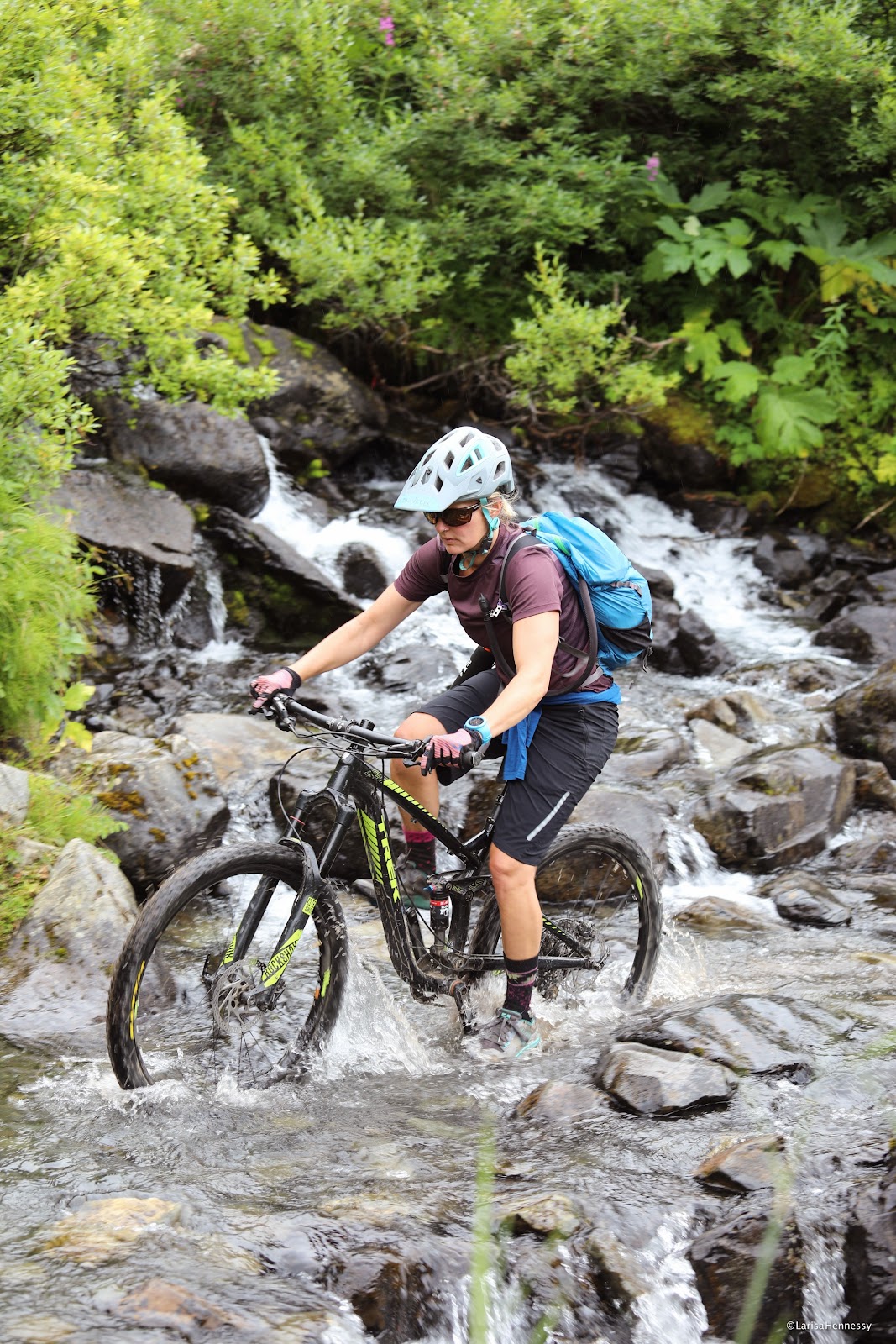 Before the cider, I stepped away to write down my impressions and was struck by a familiar phrase that I’d heard uttered repeatedly, ‘I’m sorry’. As I wrote this story I struggled with the proper lens. I’m not used to writing stories like this, where other folks participated and may have entirely different takeaways but ultimately I’ve got the keyboard. I don’t have a dramatic call to action.. I can only attest to the fact that I recently became aware of how often I apologize while on the trail compared to my male riding companions. With this in mind, I’ve made a point to unapologetically take up space on the trail from this day forth and I hope other female riders unapologetically take up space on their trails too. 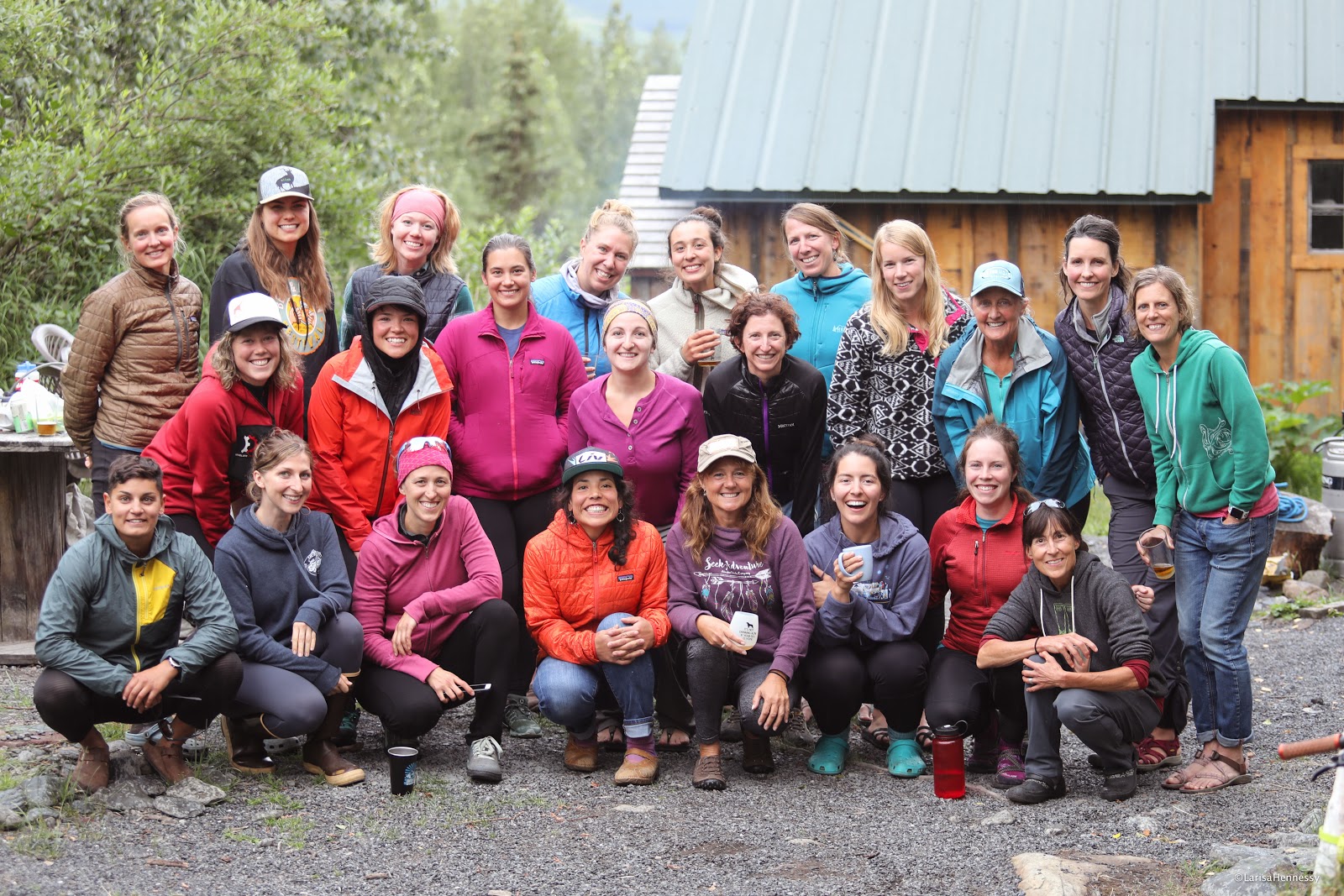 To learn more about Alaska Huts check out: https://www.alaskahuts.org/. Photos by Larisa Hennessy.